How to get rid of loneliness.
Friday, September 2, 2022 by Janet Perez Eckles

How can it happen? Whether we’re in a crowd or in the darkness of a silent room the battle to get rid of loneliness begins.

I was stunned. CNN reported yesterday that among thousands of entries, my hometown, La Paz, Bolivia, where I was born and spent my childhood, was named the No. 1 wonder of the world.

But let me share a native’s point of view.

In La Paz, being the highest capital in the world because of its altitude, visitors can become deathly ill due to the decreased amount of oxygen. 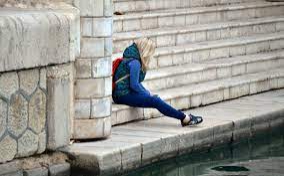 On the other hand, on a sunny day, the vibrant shade of sky blue that canopies over the city is breathtaking.

La Paz is built inside a sort of moon crater. Houses of all kinds dot the mountains that surround the city. And at night, a visitor may seem as if he were inside a gigantic Christmas tree. The lights that splash all the way to the mountain tops seem to blend with the stars in the sky, creating a unique splendor.

But how sad, that closeness is a contrast to the distance we feel from God when loneliness attacks. When we feel abandoned, we can’t help but imagine God to be distant and abstract. We believe the lie that repeats we have no one. God has forgotten us. And we have no way to overcome loneliness.

Here are three not-so-secret ways to wipe out these lies:

In the silence, in the still of the moment God is present because His Word says that “…neither death, nor life, nor angels, nor principalities, nor things present, nor things to come, nor powers, nor height, nor depth, nor any other created thing shall be able to separate us from the love of God, which is in Christ Jesus our Lord” (Romans 8:38, 39).
If we’re in God’s company, we have already conquered the army—fear, anxiety and depression that equip loneliness. “Be strong and courageous. Do not be afraid or terrified because of them, for the LORD your God goes with you; he will never leave you nor forsake you” (Deut. 31:6).

Embracing God’s promise ushers hope that tomorrow new things will come about. He promised: “Forget the former things; do not dwell on the past. See, I am doing a new thing! Now it springs up; do you not perceive it? I am making a way in the desert and streams in the wasteland” (Isaiah 43:18-19).

The enemies of any loneliness are God’s promises that repeat: nothing can come between us and His everlasting, forever-enduring love. Even when rejection sears and disappointment hurts, loneliness can’t come in because God is the perfect companion of our soul. Loneliness has no power, knowing He’s about to bring on something new, something wonderful and beautifully presented in His divine timing.

Father, while in the wasteland of loneliness or the desert of despair, I declare that tomorrow You will bring about new ways, new paths, and new open doors. I wait in anticipation for the loneliness that burdens my days to turn to the peace that comes from you. The reassurance that your promises carry. And I will be filled with the joy that doesn’t flow from others but from You. I count on the power of Your love. In Jesus’ name, amen.

How will you receive God’s comfort to overcome loneliness today?

The only connection you need to feel safe and secure.
Janet Perez Eckles
7/15/2022

With these four promises, we can dare to expect a brand new, beautiful, tomorrow
Janent Perez Eckles
6/19/2020

Consider these three steps before getting angry.
Janent Perez Eckles
11/8/2019

Three steps to have your prayers answered.
Janent Perez Eckles
11/1/2019

One thing you need to remove in order to live with confidence.
Janent Perez Eckles
6/7/2019

Your comments will not appear until they have been reviewed.